skip to main | skip to sidebar

Synopsis: The First Finn to Fly

The novel begins as Olympic champion Hannes Kolehmainen (1880‒1966), a Finn and resident of New York, discovers he has unexpectedly been granted US citizenship. It is the end of January 1921, but by May, Kolehmainen, the first of several runners to be known as the Flying Finn, moves back to Finland. During the intervening five months, Hannes must choose between two countries, two ideologies, and two women.

I: January. Hannes learns that he has been granted US citizenship from an article in the New York Times. His wife Alma is thrilled, unaware that after his marathon victory at the previous year’s Olympics in Antwerp, Hannes made a promise to return to his homeland. American-born Alma speaks no Finnish and has no desire to Finland with the couple’s son, Hannes Chester. January comes to a close at the family’s newly-built home on Staten Island, with a party celebrating Hannes’ citizenship that is attended by most of the novel’s characters.

II: February. Hannes makes the daily ferry ride from Staten Island to Manhattan, where he works as a bricklayer. Despite promising to Alma that he will quit competing, Hannes trains secretly during his commute. On the ferry, Hannes writes a Training Guide, which he intends on publishing with his coach and brother, Viljami Kolehmainen. Rautakorpi, a socialist, is agitating on the job site. The Comintern had forbidden workers from participating in the capitalists’ Olympics in Antwerp, and fellow runners and New York residents Ville Ritola and Ville Kyrönen had complied with this order, while Hannes had not. Ritola and Hannes are friends, but Hannes hasn’t spoken with the baker Kyrönen since his comrade claimed the victory in the New York marathon.

III: March. Rautakorpi visits the Kohlemainens one night and informs Hannes that without his assistance, Hannes’ comrades will avenge his betrayal. Eavesdropping, Alma learns about the move to Finland, and when her husband’s secret training also comes out, she leaves Hannes and returns to her father’s Jaakopi’s home. At Jaakopi’s house, the family celebrates Alma’s prettiest sister’s Martta’s birthday; Hannes remembers to bring her flowers. On Easter Hannes disappears for ten days. On the eleventh, Alma forgives him.

IV: April.  One day after finishing a bricklaying job on Fifth Avenue, Hannes disappears and goes off to court the beautiful Martta, who rejects him. Hannes’ cure for his dejection is walking. After making up with Alma, who grants him permission to run the New York marathon, Hannes trains for the greatest race of his day, focusing on his main opponent Kyrönen. During the marathon, the quiet Finn transforms into a killer: athletics are warfare fought with the weapons of body and spirit, and one’s work must be compensated, through betting if no other way. But Hannes’ hopes are dashed when it turns out that the sponsors of The Evening Mail Modified Marathon have disappeared, thanks to Prohibition, which has been in force for a year.

V: May. The final scene takes place on May 14, 1921, the day when Hannes, Alma and Hannes Chester board the Olympic. The pregnant Alma embarks on the journey because of her sister Martta. The family bids farewell to friends at the harbor, and Kyrönen gives them a loaf of rye bread as a peace offering. As the vessel passes Ellis Island, Hannes recounts his grim arrival in America. He talks too much in general, fearful that the Comintern assassins are lying in wait at the end of their voyage. If so, his dream of tilling the soil at the farm the Finns gave their champion will remain that – a dream. 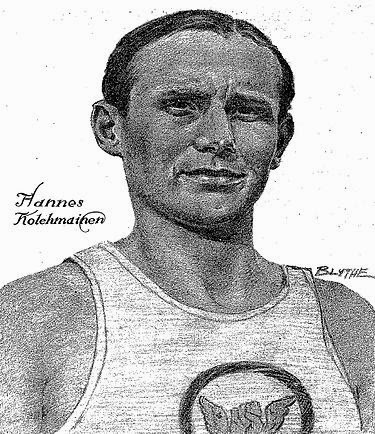